The The Mechanical Monsters 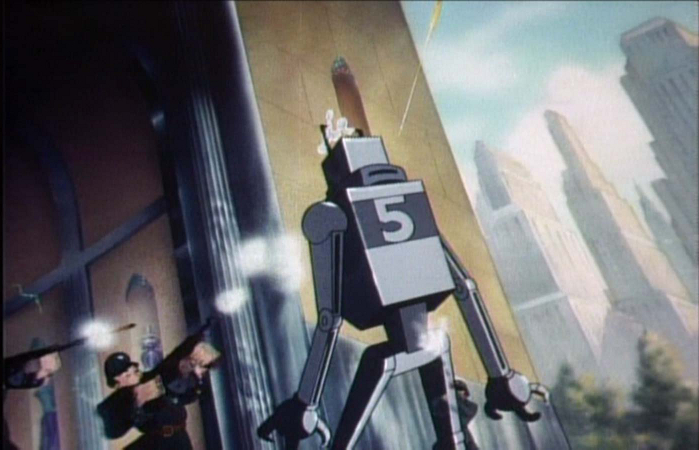 Superman battles a criminal mastermind and his robot army.
As the headline on the Daily Planet tells the public: "Mechanical Monster loots bank!" In fact, a scientist has an army of these flying robots able to steal anything in sight. Police are set up everywhere to guard an exhibition of rare jewels, but it's no use. When a robot crashes into the building, it steals all the precious stones in sight, while the policemen's bullets harm it no more than flies. Clark and Lois are at the exhibit. While Clark phones in the story from a booth, Lois stows away in the robot's compartment. Clark sees that Lois has gone missing and decides to change into Superman there in the phone booth. Superman follows the monster, while his X-ray vision allows him to spot Lois inside. His attempt to get Lois out fails. The robot knocks him onto some power lines, losing the jewelry and (nearly) Lois in the process. The robot returns to the scientist's hideout with Lois, but no jewelry. She refuses to tell the scientist where it is. He retaliates by tying her up and setting her on a platform over a pot of boiling metal. The platform slowly descends, as Superman breaks in. But he'll have to fight the scientist's entire army of robots to save the day.
The second in this wonderful serious is the best. This cartoon is also one of the cartoons i remember the most. If you read my review of the previous cartoon, you will know i owned a dvd with most of these cartoons on it. This one is one of the cartoons i remember very well from my childhood, because it used to scare the crap out of me when i was a kid, for some reason. I think i just thought the robots were scary. Anyways on to the cartoon.

The story is about this evil scientist, crime boss, og criminal rich guy. Who has build these big robots who steals jewels and cash for him at night. The story about robots flying around and stealing gems, jewels, and cash is of course published by many newspapers, including the Daily Planet. Later, as Lois Lane and Clark Kent are covering the museum's exhibit for the Daily Planet, one of the robots lands in the street outside. The police tries to stop it with machine guns but the bullets can't stop the robot and it marches through the big window in the museum. As the museum visitors, including Clark and Lois, flee, the monster marches towards the jewels and steals them. While Clark phones the Daily Planet, Lois climbs into the Monster's back, just as the monster leaves the museum and takes off into the sky. Now it's up to Superman to save the day.

There's really nothing i dislike about this cartoon, other than it's dated by today's standards, but again, i can't really dislike it for that. The X-ray vision being introduced in this cartoon, is enough to love it. But this cartoon has lots of other reasons why it's my favorite. The animation is great again, it's bright and colorful. The designs of the robots, is really cool. And one of the best action scenes of this series, in the end, where superman beats the crap out of the robots is the highlight of this cartoon. It also gets pretty dark at the end, when the villain tries to commit suicide, by jumping into the lava. but then Superman grabs him, and flies off. It's also very impressive that this short inspired movies like Sky Captain and the World of Tomorrow, and Hayao Miyazaki's Castle in the Sky. As a big fan of Miyazaki, i will say, this is pretty damn awesome.

In conclusion, this is my favorite cartoon of the Fleischer/Famous Studios Superman cartoon series. 10/10 BEING the second entry into the Fleischer Brothers Studios' line of SUPERMAN Cartoons, 'The Mechanical Monsters (Fleischer Studios/Paramount Pictures Corporation, 1941) was released for theatrical exhibition to the movie going public in November of 1941. This gave it the distinction of being on the theatre screens when the Sunday morning sneak-attack on Pearl Harbor on December 7th.

CLEARLY this would mark an abrupt change of direction that the series would be taking as the Fleischer animation operation would join in with the rest of Hollywood in the War Effort. The story lines from hence forth would be as populated with Nazi Soldiers, Imperial Japanese Agents and 5th Column Saboteurs as the were with all of those Mad Scientists.

MUCH in the same manner as the other entries into the SUPERMAN Series, there is no wasting of time. The trouble with the giant, metal creatures are in progress of wreaking their brand of havoc on the Good Folks of Metropolis when the Cartoon Short opens. They are in the middle of an in-progress menace. Much of the necessary exposition is put into place by means of headlines in the Daily Planet. (A clever use of the visual medium; as the inclusion of any Title Cards would be considered strictly passé and a throwback to the days of the Silent Movies.) FOR all of the magnificent scientific marvels that were embodied in the invention of the giant metal robots, the Mad Scientist is concerned only in looting bank vaults, pillaging jewelry establishments and repelling attacks from Tommy Gun wielding Uniformed Coppers. Perhaps this is due to poor pay, working conditions and lack of employment opportunities for brilliant, albeit Mad Scientists that they are forced to supplement their meager incomes through such unlawful means.

FURTHERMORE no one ever has truly explained just what makes these eggheads so 'Mad', anyhow! ALL kidding aside, the short is fast moving, well plotted and rendered in such a manner as to be an animated equivalent of a museum quality painting from one of the Dutch Masters. (No, Schultz; I didn't mean the Cigars!) 'MECHANICAL MONSTERS' comes complete with all the accoutrements that are needed in a series entry. First of all, the above mentioned renegade scientist is there for starters; along with some spectacular method of exacting the plunder on an otherwise helpless Metropolis. The regular Daily Planet gang gets involved in the natural manner; coming to the danger with hopes of getting "a Scoop!" MISS LOIS LANE, in order to have a chance to "Scoop the other Scoopers" gets a little too close and is abducted unwittingly by the baddies; having slipped and fallen into the iron giant's convenient and cavernous trunk space. (What's an Editor to do? She seems to get caught up in similar fashion time and time again! SPEAKING of recurring patterns, Superman manages to save the day, saving Miss Lane and her headline story. All's well that ends well, especially in Metropolis; as the episode closes out with a wink from Clark Kent to the audience.

WE suppose that we could brand the Superman Cartoons as being formula and even clichéd, but that may not be fair, either; for after all, the Fleischer/Famous Studios' productions were essentially blazing new trails in the field of the animated movie. Whereas here to for, virtually all of the animated cartoon out put was done using highly caricatured human characters, anthropomorphic talking animal's characters or both. The idea of writing an action-adventure story featuring realistically rendered human characters in fantastic, albeit serious short subjects hadn't been done before, unless it would be highly obscure.* THE Fleischer SUPERMAN Series changed all of that by paving the way for so many of those adventure cartoons that we have enjoyed over the years on Saturday morn. Like most of the rest of this series, we rate it very high on the scale.

NOTE * We can think of Walt Disney's FANTASIA (Walt Disney Productions/RKO Radio PUctures/1940) as being an exception; several of the segments having been done in a realistic style. Are there any others? POODLE SWCHNITZ!!
See: this FAQ entry Watch Mechanical Monsters (1941) on: