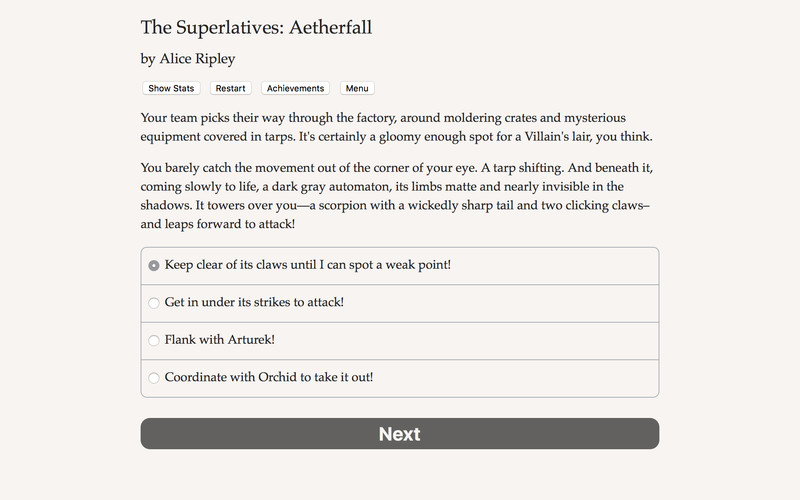 The Superlatives: Aetherfall is a 260,000-word interactive novel by Alice Ripley. It’s entirely text-based, without graphics or sound effects, and fueled by the vast, unstoppable power of your imagination.

The prestigious Society for the Advancement of Individuals of Superlative Talent and the Protection of the Queen has invited you to become their newest member! But on the very day the Society plans to initiate you, unknown Villains destroy the Society headquarters and kidnap your colleagues! As the sole remaining full member of the Superlative Society, you must initiate new recruits to investigate the abduction.

Will your gain your team’s trust and convince them to work together, or will they fall apart under the pressure? Will you cut a deal with London’s Villains, or even turn the Society into Villains yourself? Will you trust the mysterious Dusk and Mr. Ink, who offer you help, or will you uncover their many secrets? 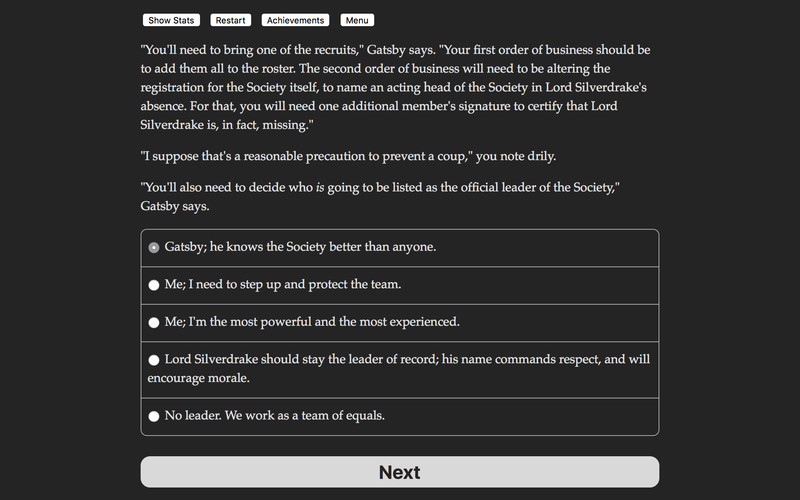 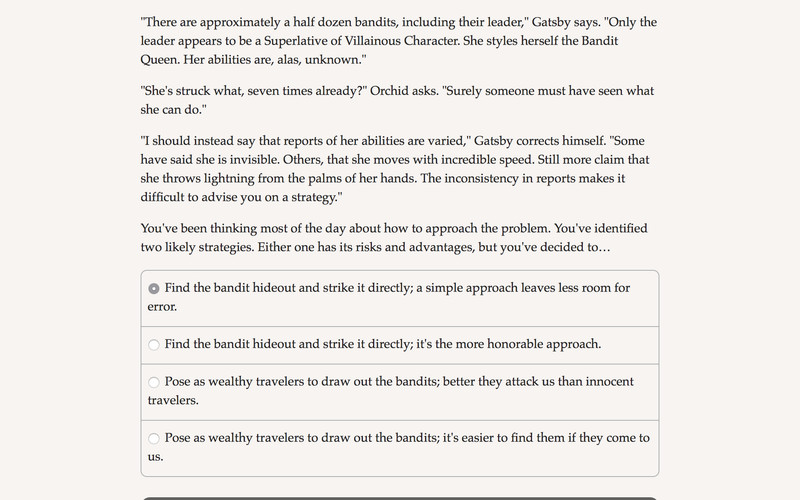 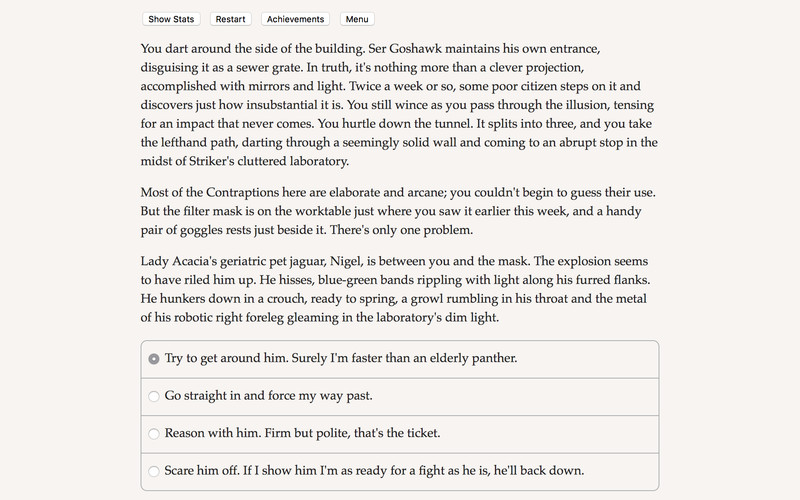 Despite being part of a series, The Superlatives: Aetherfall provides a complete story with a proper ending unlike some other choicescript games. I'm looking forward to reading the sequel and hopefully this time they'll let me flirt with the nice plant lady from Venus.. A very unique superhero experience. You can build your own team, get close to them, and actually do some good. I don't know if I could have turned my team into villains, but I didn't try. This is one of the longest Choice of Games I've played, which is good. If you're looking for a good story and character development, this is for you.. Great game! Fun story, interesting characters. I'm definitely looking forward to re-playing so I can make different choices and see how things play out differently. A+. Pro: You get to befriend a nice plant lady from Venus.
Con: You don't get to flirt with the nice plant lady from Venus.

Despite being part of a series, The Superlatives: Aetherfall provides a complete story with a proper ending unlike some other choicescript games. I'm looking forward to reading the sequel and hopefully this time they'll let me flirt with the nice plant lady from Venus.. Superlatives is pretty great. Both the story and characters are interesting, and if superheroes or steampunk is your thing I think you'll enjot it. There is definatly a whole lot of potential here. I'll certainly pick up the sequel.

One thing I thought was kind of strange was with how early and how they were introduced I thought Hollow was going to be a more major character, and maybe even a RO.. I enjoyed this overall. The Superlatives is an equal mix of superheroes and the Victorian London of Sherlock Holmes. Unique. My only real quibble is that its too easy to make a choice that has consequences you do not intend. So you end up restarting a lot or playing through and seeing where your choices ends up. Fairly good replay value. Recommended if you like superheroes or steampunk genres.. Pro: You get to befriend a nice plant lady from Venus.
Con: You don't get to flirt with the nice plant lady from Venus.

Despite being part of a series, The Superlatives: Aetherfall provides a complete story with a proper ending unlike some other choicescript games. I'm looking forward to reading the sequel and hopefully this time they'll let me flirt with the nice plant lady from Venus.. This game is absolutely worth $5.99 and I will likely buy more games from this company as a result of this one. In fantasy/superhero stories you have certain basic components and if an author strays too far from those then they lose the heart of the genre but at the same time each piece has to be articulately crafted and carefully weaved together. Alice Ripley did a great job in this endeavor. The tone of the story instantly takes you on a fantastic superhero adventure through Victorian London. There's murder, mystery, action, a couple shots of humor, and even a dash of romance.

I left this game open on my screen a couple of nights so ignore the play time. For an average reader you probably have about 8-10 hours on a single play through. There are so many options and branching storylines and achievements that I plan on playing it at least once more. My personal preference would have been for more elements to enhance the presentation such as graphics, music, and imagery but the screenshots show you what you're getting into so I'm not complaining.

Gameplay
-Replaced the weapon of the Prim cannon with one that shoots straight projectiles
-Introduced workers which can be killed in game modes with enabled production
-Disabled regular income in game modes with enabled production
-When killed, Workers respawn after some time automatically
-Workers add income on their return to the main tent
-Reworked how difficulty is realized in coop game modes: Now all difficulty settings except hard reduce the max hitpoints of CPU controlled opposition
-Increased the damage, range and weapon cooldown of arrows giving them more punch and reducing visual clutter at the same time
-Increased the rate at which units can dodge to evade projectiles

Visuals
-Removed trails which previously visualized resource exchange
-Added a new character model used for workers by all factions
-Reduced the amount of flickering caused by Fog of War
-Removed melee weapon trails for now due to bad performance and crashing the game and SDK
-Replaced the player marker with a more appealing special effect
-Replaced the marker for the player respawn with a more appealing special effect
-Again, replaced some of the arrow sfx with some which look more like arrows
-Added support to an outline effect which is played when targeting enemy units, needs more work tho

Misc
-Added several map layouts which will be used in a later update for Capture The Flag and a new game mode
-Added a system which makes the creation of procedural shapes easier, future use
. Update to v.0.1.8:
Change log

UI
-Added kill messages
-Made improvements to readability of texts
-Improved tooltips for some elements (mainly appearance and weapon dropdown menus)
-Restructured main menu navigation to improve flow
-Restructured match lobby to show match, campaign and other settings in different windows
-Players need to be ready before starting a new match
-Added a chatbox to the match lobby
-Changed the appearance of loading and game over screens
-Capture bar screen position now adjusts to the objective’s position in the world
-Connected some loose ends

Known Issues
-In rare cases some sprites are not rendered correctly
-In some cases the terrain appears too dark after map load, moving into differen areas solves this issue. Update to v.0.1.6:
Change log

Misc
-Various smaller bugfixes
-Made some changes to how FOW is processed; needs more testing and a performance pass
. Update to v.0.1.2:
Change log

Gameplay
-Added diplomacy in preparation for the upcoming single player mode
-Added personality traits to NPCs, which are used for diplomatic decisionmaking
-Added skeleton single player campaign mode; it is still in alpha, so you might not see it in your version
-Improved projectile collision detection on clumped up units which was introduced by disabling local avoidance
-Fixed a bug which prevented new matches from starting correctly
-Fixed a bug which gave players a head start on consecutive matches
-Removed cost of soldiers
-Reduced rate of income
-Removed wave movement from arrows
-Increased arc and velocity of arrows to make them more distinguishable from regular bullets

Performance
-Reduced memory allocation during gameplay a little, hiccups are still there, tho

UI
-Added dropdown menus which enable the player to change the look and weapon of bodyguards and their player character
-Added icons for primary and secondary fire modes and their standard key binding; Those will change according to selected weapon in a future update
-Cleaned up the ui and added buttons to show or hide panels which are currently irrelevant to the user
-Removed buttons from the technology panel which are currently not in use
-Added support for diplomacy overview, diplomatic events and diplomatic actions
-Fixed a bug which made certain ui components unresponsive on consecutive matches

Input
-Replaced the input interface with a more robust system supporting a variety of game controllers and buttons; needs more testing, but we feel more comfortable with this system in place.. September Update 1:
Change log (v.0.3.0)

Maps
-Added secondary maps to all game modes which support unit production
-Secondary maps act like home maps for a team and may be entered and exited by clicking on a position on the minimap
-Added links between main map and secondary maps at specific points, usually at team starting positions

AI
-Added cannons back to the default production rotation

UI
-Unified tooltips for all game modes to make them more consistent
-Added MoveTo/Show function to the minimap, one makes your character move there, the other pans the camera to the targeted location
-General cleanup and improvements

FOW
-Improved visual quality of the Fog of War

UI
-Moved buttons used to manage troops and their targets into a new panel
-Screen resolutions can now be selected properly without going full screen. Update to v1.30:
Game
-Added three mounted units for each faction
-Added a building to produce mounted units for each faction
-Added base expansions to bases. Now every team’s base starts at level 1, after a while they level up and add more foundations and palisades to enhance gameplay. Each base levels up two times per match
-General polish and updated game engine to latest version

Game
-Hero units now inherit stats from other unit types
-Set window mode to full screen by default
-Convention: Unit names are now single word only
-Changed a couple of unit names to conform to this convention
-Added some checks to prevent incorrect building placement
-Added attack boni vs other types to all units
-Now preventing key clicks from opening windows which don‘t make sense for the current game mode