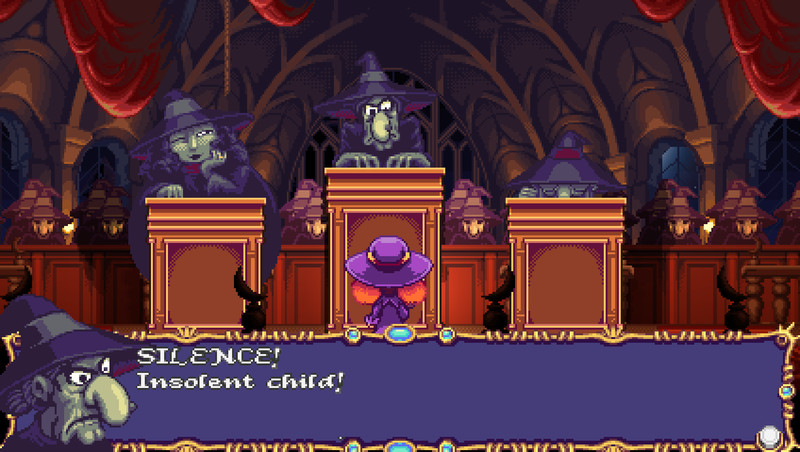 Being a student of mystical arts is hard work, doubly so if you are Belle MacFae - a freshman student at Hagmore School of Magic. The teachers and the staff are mean, her friends are few, and her grades suck. Worst of all – Belle has a tendency to be at exactly the wrong place at exactly the wrongest time. Like tonight, for example, when she stayed up late to practice her fire magic, but instead got framed for upsetting an ancient ritual. And what better way is there to punish an unlucky first-year student, than to charge her with an impossible task on the worst night of the year? Re-create the Walpurgisnacht Brew, or be expelled, and with all manner of spooks taking over the school, expulsion is starting to sound better by the minute.

Inspired by games like Slightly Magic, Puff in Dragonland, and the Dizzy series, Mystik Belle is a hybrid of a classic point-and-click adventure and a modern metroidvania.

You may experience all of the following while playing this game: 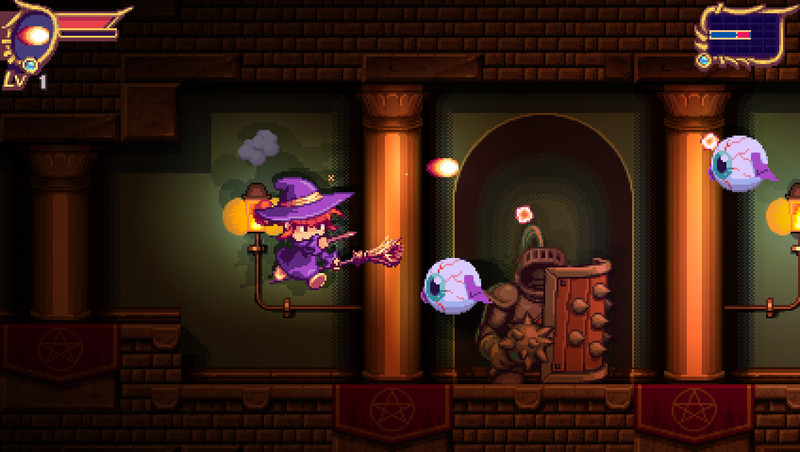 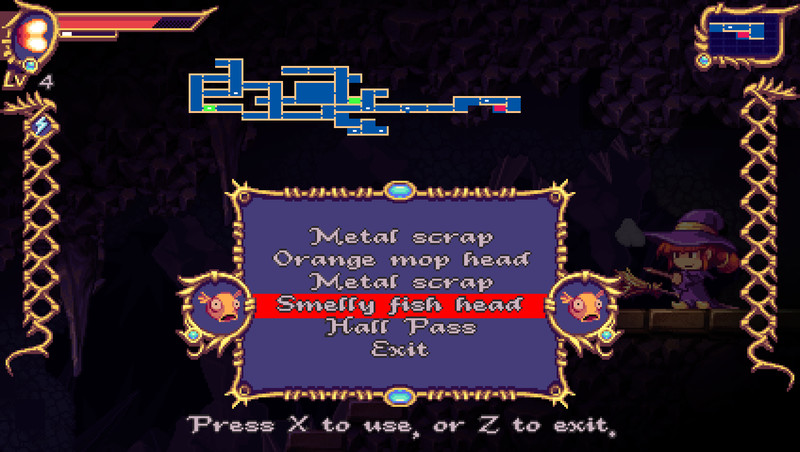 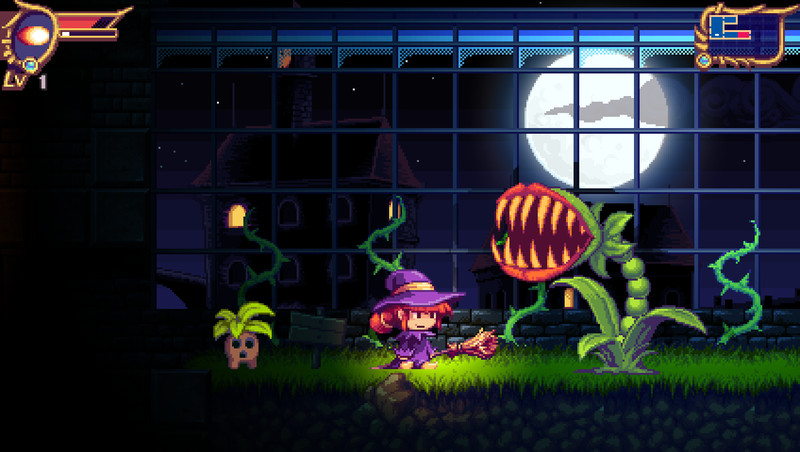 
At first I didn't expect too much from this game for its looks and price, but I must say I was quite surprised. The gameplay and combat mechanics are rather well made. The environments are alive with myriad enemies and subtle bits of activity that give the world the feeling of being alive around you. Characters all have their own personalities that bring them to life without falling back on traditional tropes.

My only real complaints about the game would be that it just felt short, with even a casual run taking no more than 4 hours, and that at points you can feel a bit lost in a bad way, as you try to figure out how to use the items in your inventory with little to no real clues until you eventually stumble on the one area of the map where the (!) pops up.


I would encourage you to pick this game up if your curious about it, its far worth the money spent on it, and I hope to see more from the developers in the future.. Cute Castlevania-equse continous world exploration platformer with an element of point and click adventure puzzles. It's got very floaty slow feeling jump, which initially put me. However the game has a very forgiving health system and contact damages both you and enemies which makes up a lot for the style of the controls.

Initially I was stuck because I wasn't expecting the inventory puzzles to work they way they did, but after you get the concept it seems to become much easier.

The developer clearly deeply cares about the characters and setting ad revelaed by the art dialouge, and some of the technical details (expanding dialog panels, multiple light source shadows) also show a real attention to detail.

Ultimately I was charmed by Belle, it's worth a look!. Speculative history: Kid Dracula had a GBA sequel in the works in 2004 largely rooted in concepts from Symphony of the Night and other Castlevania GBA games - however, the development was outsourced and while the platform action portions were solid, Konami was totally confused in alpha testing by elements of the game that involved puzzle solving and item hunts. Instead of having the elements removed they postponed the game indefinitely, to the point that when development shifted to the Nintendo DS, they forgot that the game even existed. Meanwhile the original developer took the code, removed all the Kid Dracula and Castlevania references, moved the code to PC, and renamed the game Mystik Belle.

Of course, none of this happened. But if you told me this was the history of the game I would believe you completely. What this is though, is some incredible work of a tiny developer. Well worth picking up.. Loved this game. It was short but sweet, reminding me of platformers from the 90's. Some of the puzzles were relatively straightforward, but others were interestingly complex. To be honest, it took me a lot longer than I'd like to admit to figure out how to get the boulder unlodged in the underwater area. While there is a great deal of backtracking through all the areas, I'll say at least half of mine was due to taking everything I picked up to Miss Willow just to see what she'd say about it. Poor Miss Willow, behind your kind, hardworking veneer is a lonely overworked woman who is living for the weekend.

Long story short, if you enjoy shooting things with fire, whacking things with a broom, traipsing through a school filled with an inordinate amount of ghosts and monsters as you ferry random items back and forth, and you have a few hours to spare, I'd definitely recommend this game.. A funny metroidvania game of a girl that lives in a magic boarding school. Perfect for fans of Harry Potter, Castlevania and Conker's Bad Fur Day.

Edit: The game is available on consoles now, and they toned down the swearings for those versions. Which make the Steam version the better one as you can enable them back.. It's well made and incredibly charming. It's good to see a game with an upbeat protagonist and bright colors after every other title races to be as depressing and hard (sorry, "classic") as possible, especially if it fits in under 30MB. I hope there'll be a sequel.. An awesome blend of some of my favorite games, or at least that's what I see when I play, and that is what matters. It may be a coincidence that the story is about a failed cauldron experiment, but I assure you this particular experiment was a success. A little bit of SOTN, a touch of Dizzy ( without the horrible controls ), throw in an artistic style that Wayforward would be more than proud to have called their own, and with a pinch of Popful Mail and a dash of Magical Pop'n, stir it all up and you get Mystik Belle. Cheers Enjoy!

P.S. If you do enjoy this gem you might want to give "Spud's Quest" a try, they appear to share a few inspirations!. It's a Metroidvania, but with all the fun and moon logic of a point-and-click adventure. Also, you can't keep everything in your pockets, so you're forced to build item caches around the castle (warp points).

The rest of the game is fine. It's pretty, it sounds good, you level up to gain health and better fireballs. There's two endings depending on how many hidden mcguffins you collect (I saw both. I like the "bad" ending better.) In every way other than the inventory system, this is a good game. The inventory was a constant annoyance. It was enough of a thorn in my side that I cannot recommend this game. Find your Metroidvania fix somewhere else.. The game is very slow feeling and the Character is far too large... Not having Knockback is great; but without invincibility frames some enemies can run into you to death if you don't use the dangerous Close Quarters Broom attack that only works when enemies are close. The game also has an odd item system much like an adventure game where you'd pick up items and use them to progress certain areas; but you only have a limited amount of item slots forcing you to drop items that you may have.. Mystik Belle is an appealing mix of Metroidvania and oldschool adventure that deserves much more attention than it's getting now. The map design is simple but effective, the sprite artwork is beautiful and impressive, the dialogue is quirky, and it feels satisfying to play.

One element of the game that I particularly appreciated is that the adventure-esque puzzles are generally neither too obvious nor too cryptic. At times, I got a little puzzled deciding where I needed to go next, but I never needed to resort to a walkthrough. Everything makes sense.

I feel as if it could have used just a bit more refinement in certain areas, though. My biggest qualm with the game might've been Belle's lack of defensive tactics. She's not nearly small or agile enough character to avoid the barrage of attacks coming from all directions in certain situations, meaning that taking lots of damage is sometimes (seemingly) entirely unavoidable and creates some frustrating difficulty spikes, especially during later boss fights. Any sort of magic shield or dodging capabilities would have been greatly appreciated. It also doesn't help that enemies randomly generate from the sides of the screen and sometimes hit you the moment you enter a new room. In short, it doesn't always feel justified when you get hit.

A minor complaint that I have is that while the soundtrack is catchy and suits the mood quite well, I wish it had a bit more variety; it feels like one theme plays through the majority the game. Item management is a hassle due to the very limited inventory space, leveling up feels like a chore until you max out, and I feel like it wouldn't have been difficult for both of those things to be set up more efficiently to keep the flow intact.

In the long run, these issues did no keep me from staying invested in the game for hours at a time until completion. There are a lot of fun little details to it, and the whole concept is right up my alley. For me, buying Mystik Belle was money well spent, and I could picture myself playing through it again sometime in the future.