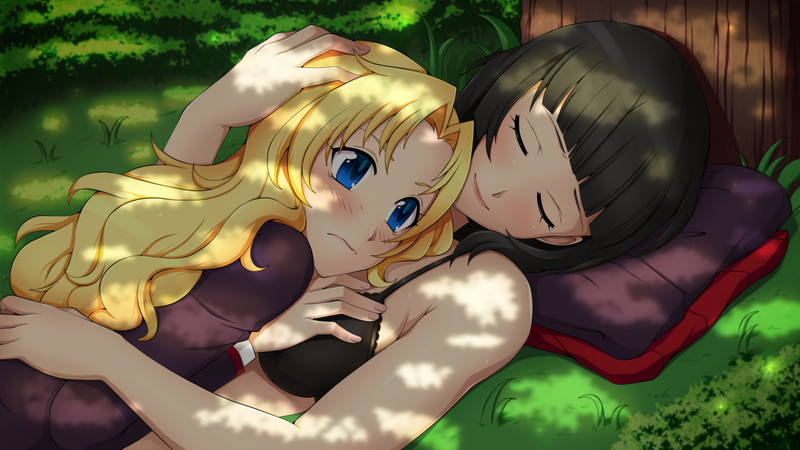 Maiden's Heart Academy is a strict all-girls high school that is well known for having students that end up being very successful. The girls are also admired for their generosity and politeness. It is at this school that the protagonist, a 17-year-old male, ends up attending after his mother has him enrolled. Although reluctant at first, the headmistress of the school decides to let him in when she meets him and hears that the protagonist was heavily bullied for his feminine looks and personality. The only condition is that he must dress as a girl at the school and keep the fact that he is actually a boy from getting out.

Maria Lockhart
The protagonist of the story. Having adopted the female name Maria, he enrolls into Maiden's Heart Academy. He was tormented by fellow students in the past and ended up in the hospital after being pushed down a flight of stairs.

Erika Farrow
The daughter of the headmistress. She becomes Maria's roommate due to her mother's request. She does not like men, so she is less than thrilled that she has to share a room with a boy.

Audrey Cornett
Maria's cousin who she has not seen or talked to since they were kids. She does not recognize him dressed up as a girl, but something about him seems familiar to her.

Sylvia Farrow
Erika's little sister. She's a bit of a troublemaker who does what she wants and LOVES to eavesdrop on conversations. She tends to get on Erika's nerves very frequently.

Dawn Layson
She's an energetic girl who is good at sports, despite being small. She develops a massive crush on Maria the instant they meet.

Harley Kraft
She's a tall girl who had to repeat her final year because she failed multiple courses. She sleeps too much, skips class and has trouble understanding common sense. 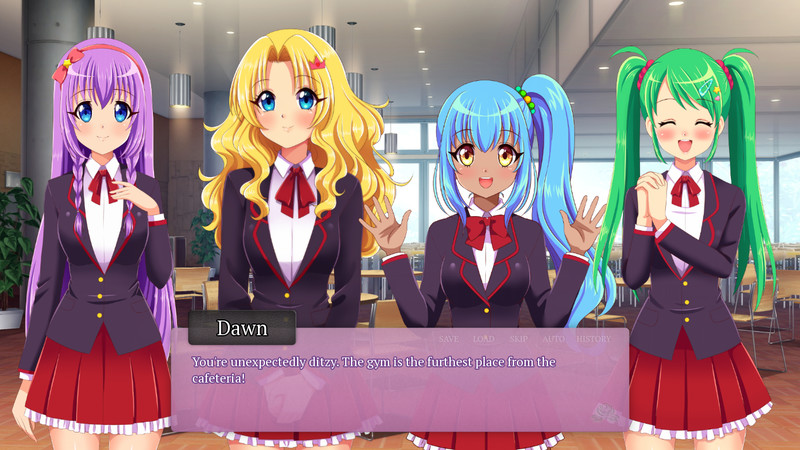 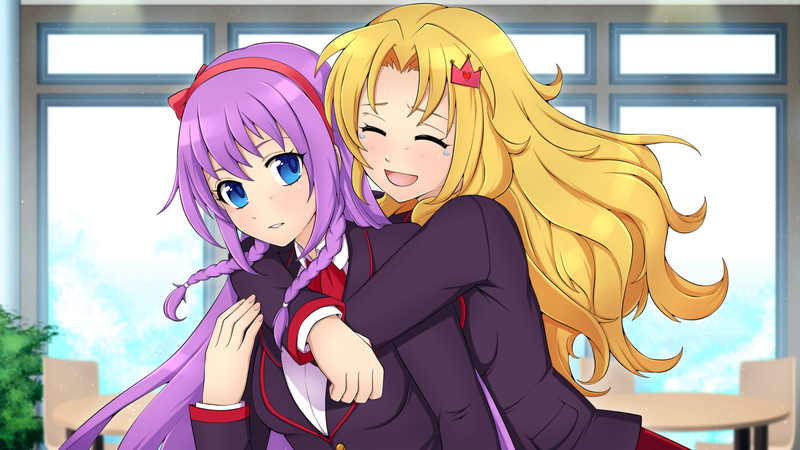 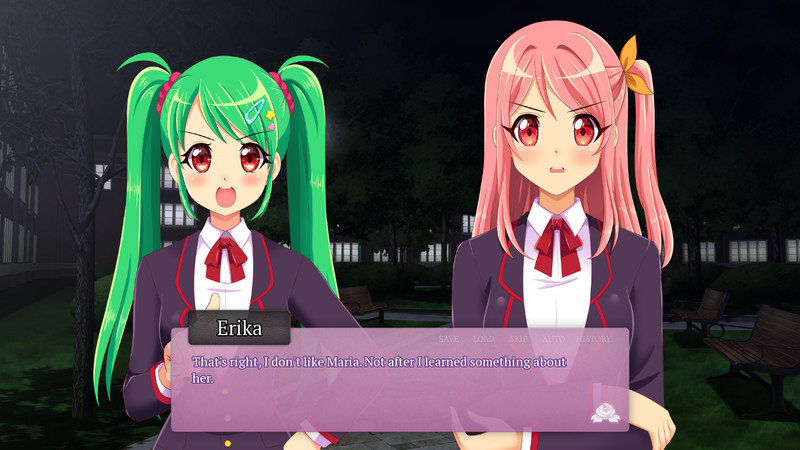 Gorgeous artstyle, and I for one really like that the MC is quite different to a lot of other crossdressing/trap characters in many manga I've read, as well as some VNs, really refreshing that he's not portrayed as a helpess pervert, and a couple of the routes are so freakin' sweet I almost had a cuteness overload. One route had me on the verge of tears, but was still nice, it would have been nice to see the characters dressed in a wider variety of outfits beyond their school uniform, especially for Maria and Audrey, but can't have everything, heh.
Overall a good experience, I enjoyed the story and I do recommend it, even at full price, ten dollars isn't a big deal really, I sure don't have any complaints about it, even if it is closer to $13 in my currency.
Only one thing bugs me a little about this game, I did observe a few spelling and grammatical errors here and there, nothing too serious and it was easy enough to make sense of what was actually meant, perhaps a proofreader would have helped.. I stumbled upon this with some friends, and thought it would be silly.
I was dead wrong; this is perhaps one of my most liked games I have in my library simply because of the plot.
It might be a bit ludicrous to believe, but this story made me realize that I was in reality a piece of crap and subsequently began to shape up. I now live a happier life.. I have to be honest, its definately not what I thought it was gunna be. Though it definately had many alternate storylines that were very refreshing and felt like it brought something new to the genre. If you want something wholesome and worth spending your money on and you like these types of games I would definately recommend this game. It was wonderful from start to end and it was a joy to play. Thank you so much for making this game :). This is a sweet visual novel. Frankly, it might be the most Christian one I've seen. And by that I mean, there is not sex outside of marriage, and aside from a few scenes involving either a faulty door lock or a VERY hyper first-year high schooler... nothing about anyone seeing/touching things they shouldn't. To be fair, said hyper girl didn't believe what she was being told, so she... made a grab...

It also shows Christians in a good light in other ways.

Now, you may be asking how I can say that when there is a boy crossdressing in an all-girls Academy... well, that boy has been through a LOT. His backstory is HORRIBLE. The inciting incident is him being thrown down a flight of stairs at his public high school. And during one of the paths, you find out it was no accident. Heck, in the common route before the branching... there is a scene that shows how his scarred back came to be.

All of the girls are nice in their own ways. From the roomate who HATES men (at least in the beginning) to the cousin who used to be his best friend (a lot of near recognition there), and even the completely common sense-lacking older girl... Seriously, she takes everything literally... and doesn't get a lot of important things...

This is a great read, so do try it.. 8 hours to complete (skip already readtext)

This is pretty much how feminist want their boy to be.
. nice to see the roles revesed its great wish there were more vn's like this very good. Guys, send help! I actualy like a trap for once!

10/10 a well written trap.. My Life as a Maiden does a good job treating issues of gender presentation sensitively--the voice of the protagnist's mother in particular is a good and strong voice for toleration and support. However, the game's writing in general didn't work for me. I didn't think the characters were characterised interestingly, and the choices (there are four of them in the whole game) were not well designed (they are pretty much of the "who do you hang with" variety channeling you into one of five different endings in which you have a romantic story with your chosen classmate.

I found the writing style very odd, veering from the most immature moments ("I want to be the first to touch your butt" to moments of horrific trauma (flashbacks of torture with a knife) and not in a neat genre-bucking way. The transitions were very jarring, and I don't think the writing was up to it. This was most notable in Sylvia's ending, which I thought was the weakest one. One ending (Audrey) was way more developed than the others which felt odd as well. Dawn, I thought, stood out as a bit funnier and more well written than some of the others, but they were all fairly forgettable. In my playthroughs, I found a few dozen typos.

The art is downright boring--the classmates's face look very similar to each other, and the scene is often several people standing stock-straight forward without any dynamism in their presentation. The CGs were OK--not especially good or bad, and the music was forgettable.

I was disappointed with this game. The idea was an interesting one, but I don't think this work as a piece of interactive fiction--it's just not strong enough prose-wise, and the interactivity isn't well integrated enough for the choices to be meaningful or interesting.. Nikatine has it right! The game is great just for the fact that it shows that it shows alternative lifestyles and that some folks don't have to be alone. It misses the mark in some ways but the bullying and desire to express oneself fully but not being able to do so hits the mark. It has its flaws and I feel that it opens doors. I would like to say thank you to RhinoGearz for making this.. this was a great game ive played it over and over again and im still hooked on it is there going to be a second game ? i really pray there is