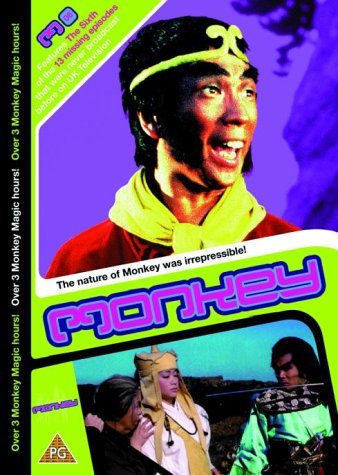 Monkey is the story by Wu Ch'êng-ên based on the ancient Chinese legend tracing the origins of Buddhism. It follows the adventures of Tripitaka and disciples Pigsy, Sandy and of course Monkey, on their journey from China to India to fetch the large vehicle holy scriptures which will save the world.
An adaptation of a Chinese folktale about a pilgrimage to the West undertaken by a monk and his divine guardians.
Like so many other reviewers on here, my memories of this show are universally warm. In fact, so fond are said cherished memories, that I recently purchased the DVD box set in order to revisit that happy and carefree period of childhood, whereby I used to sit utterly mesmerised, as I watched the ongoing quest of Monkey, Pigsy, Sandy, Tripitaka and later Yu Lung a horse/dragon/man (you'll really need to watch it to understand), when the much loved show initially aired on BBC 2 on Friday evenings, as I recall.

Well, I'm pleased to say that even after all these years and now viewing this with adult i.e. more cynical(!) eyes, the show has lost none of its inimitable charm.

Simply wonderful entertainment, from the magical characters and their comical interactions with one another to the perhaps not so special effects (which actually serve to heighten the fun) and of course, not forgetting the hugely memorable opening title sequence from the first season, the passing of time has not in any way, shape or form diminished any of Monkey's spellbinding charm.

As Monkey himself would probably say, 'Oi! You there! Go out and grab yourself some nostalgic fun.' This show was the best! I used to love the craziness of it.

I remember the pilot episode( i have it on video somewhere) where monkey went to heaven to "kick off" with the Jade emperor was a hoot!

especially when monkey meets the dragon kings daughter to claim his weapon (the magic wishing staff).

An absolute classic. A must see!.

What are you reading this for?

Get out there and grab a copy now!

You wont be disappointed!.